Before the game, the President released a statement reminding America about the brave men and women who proudly serve in our Armed Forces. (VIDEO BELOW) 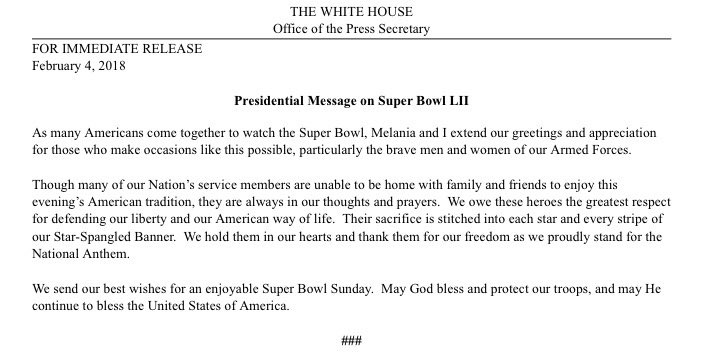 “As many Americans come together to watch the Super Bowl, Melania and I extend our greetings and appreciation for those who make occasions like this possible, particularly the brave men and women of our Armed Forces. Though many of our Nation’s service members are unable to be home with family and friends to enjoy this evening’s American tradition, they are always in our thoughts and prayers.”

“We owe these heroes the greatest respect for defending our liberty and our American way of life. Their sacrifice is stitched into each star and every stripe of our Star-Spangled Banner. We hold them in our hearts and thank them for our freedom as we proudly stand for the National Anthem. We send our best wishes for an enjoyable Super Bowl Sunday. May God bless and protect our troops, and may He continue to bless the United States of America.”

Prior to thier party, the President and First Lady were greeted by the “Florida Atlantic University Band” where they jazzed up their Super Bowl party. (VIDEO BELOW)

President Trump and First Lady Melania walked out with smiles watching the awesome band preform for them. After the first song, the President walked over to greet and thank the band.

Then, the band continued for the couple.

What an honor it must be to preform for the President and First Lady!

Watch this is an AMAZING moment in time.

Are you proud of the First Family for extending their greetings and appreciation for our military and the National Anthem on Super Bowl? Sound off below in the comments and let us know.