The firing came just days before McCabe would have been eligible for a lifetime pension, but now ends after determining that he lied to investigators reviewing the bureau’s probe of Hillary Clinton’s email server. (Video Below)

“Pursuant to Department Order 1202, and based on the report of the Inspector General, the findings of the FBI Office of Professional Responsibility, and the recommendation of the Department’s senior career official, I have terminated the employment of Andrew McCabe effective immediately,” Attorney General Jeff Sessions said in a statement.

After an extensive and fair investigation and according to DOJ procedure, the Department’s Office of the Inspector General (OIG) provided its report on allegations of misconduct by Andrew McCabe to the FBI’s Office of Professional Responsibility (OPR),” Sessions said.

The FBI’s OPR then reviewed the report and underlying documents and issued a disciplinary proposal recommending the dismissal of Mr. McCabe.  Both the OIG and FBI OPR reports concluded that Mr. McCabe had made an unauthorized disclosure to the news media and lacked candor − including under oath − on multiple occasions.

“The FBI expects every employee to adhere to the highest standards of honesty, integrity, and accountability. As the OPR proposal stated, ‘all FBI employees know that lacking candor under oath results in dismissal and that our integrity is our brand.'” (Video Below)

Sessions’ decision to fire McCabe came as Justice Department Inspector General Michael Horowitz concluded a bureau oversight investigation, with a report expected to be critical of McCabe’s handling of the Clinton email probe, his handling of the bureau during the early months of the Russia investigation, and his ties to the Democratic Party.

Horowitz determined that McCabe hadn’t been forthcoming in regard to the handling of the FBI’s probe into Clinton’s use of a private email server while she was secretary of state in the Obama administration.

After the announcement, President Trump pulled the plug that has all the swamp creatures paddling up Schiff’s creek.

The President tweeted, “Andrew McCabe FIRED, a great day for the hard working men and women of the FBI – A great day for Democracy. Sanctimonious James Comey was his boss and made McCabe look like a choirboy. He knew all about the lies and corruption going on at the highest levels of the FBI!”

Andrew McCabe FIRED, a great day for the hard working men and women of the FBI – A great day for Democracy. Sanctimonious James Comey was his boss and made McCabe look like a choirboy. He knew all about the lies and corruption going on at the highest levels of the FBI!

After being fired by Attorney General Jeff Sessions on Friday, former FBI Deputy Director Andrew McCabe released a statement, claiming the “attack on [his] credibility” “is” part of this Administration’s ongoing war on the FBI.” (Video Below) 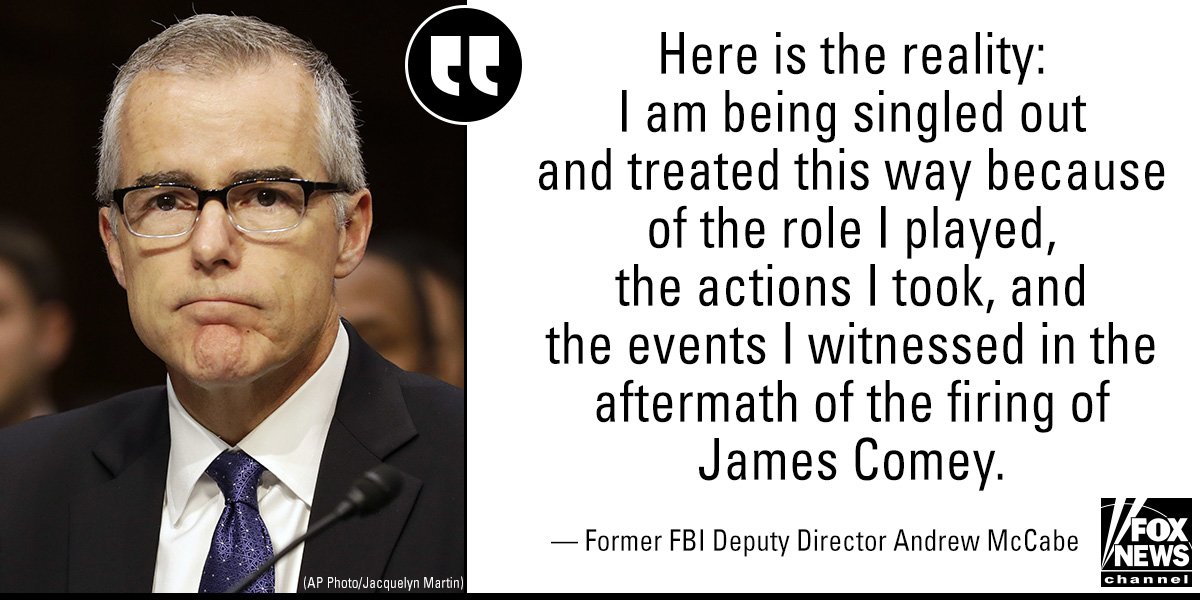 “This attack on my credibility is one part of a larger effort not just to slander me personally, but to taint the FBI, law enforcement, and intelligence professionals more generally. It is part of this Administration’s ongoing war on the FBI and the efforts of the Special Counsel investigation, which continue to this day. Their persistence in this campaign only highlights the importance of the Special Counsel’s work.

For the last year and a half, my family and I have been the targets of an unrelenting assault on our reputation and my service to this country. Articles too numerous to count have leveled every sort of false, defamatory and degrading allegation against us.

The President’s tweets have amplified and exacerbated it all. He called for my firing. He called for me to be stripped of my pension after more than 20 years of service. And all along we have said nothing, never wanting to distract from the mission of the FBI by addressing the lies told and repeated about us. No more.” Andrew McCabe said.

Investigative reporter Sara Carter, said on Fox News: “[McCabe] believes this is all about President. No, this is about his colleagues at OPR…who found he had lied.” (Video Below)

.@SaraCarterDC: “[McCabe] believes this is all about [@POTUS]. No, this is about his colleagues at OPR…who found he had lied.” #IngrahamAngle https://t.co/rjbwWNHPjX pic.twitter.com/2LJrihxcnG

“They thought all of it would just sink to the bottom of the swamp, lost to history forever. Then an odd little thing happened. The coronation of Hillary Clinton was canceled.” James Woods <– READ HERE

Are you glad to see the swamp draining? Let us know in the comments below.