President Trump is taking a STRONG ‘America First’ stand at the border. And he has closed entry points to the migrants who are trying to get into America.

America had sent word early on that migrants would be turned away. Yet, Sunday the invasion of caravan migrants tried to storm the U.S. border. (VIDEO BELOW.)

President Trump is NOT messing around. Come in LEGALLY or not at all.

In a tweet early Monday morning, President Trump said, “Mexico should move the flag waving Migrants, many of whom are stone cold criminals, back to their countries.”

Furthermore he tweeted, “Do it by plane, do it by bus. Do it anyway you want, but they are NOT coming into the U.S.A. We will close the Border permanently if need be. Congress, fund the WALL!”

In what turned out to be a message to the Mexican government, Mexico is planning on deporting up to 500 of the trouble making migrants.

The Guardian reported, “Mexico plans to deport up to 500 people who tried to “violently” and “illegally” cross the border into the US on Sunday, the interior ministry has said.” (VIDEO BELOW.)

Mexico expected to deport 500 Migrants at the border.

Additionally, the BBC further reported, “Video footage shows dozens of people running towards the border fence near the city of Tijuana. US border officers used tear gas to repel them.”

“US Customs and Border Protection said traffic in both directions was suspended at the San Ysidro port of entry,” per The Guardian.

The map below shows the progress of the migrants from South America through Mexico and onto to America since October 13th. (VIDEO BELOW.) 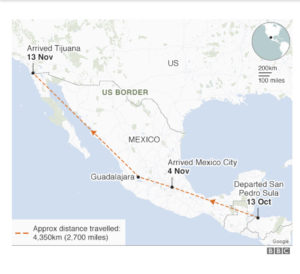 WATCH the video below as the migrants STORM the U.S. border.