First Lady Melania took to Twitter to wish everyone a Happy New Year.

And what made it extra special, she posted a glamorous selfie.

The First Lady wrote on Twitter, “#HappNewYear2019” with her beautiful selfie.

The First Lady, who has been mocked for everything from her Christmas decorations to her choice in footwear, posted the happy snap bright and early Tuesday morning after celebrating New Year’s at the Trumps’ Mar-a-Lago Club, where she was hosting sans husband, who is still camped out in the White House during his shutdown showdown with the Democrats, reported Fox News.

She posted a photo to mark the New Year but several guests at the glamorous Mar-a-Lago party shared their own photos of the First Lady.

Melania hosted the event solo after President Trump opted to remain at the White House following the partial government shut down. (Continued Below)

First Lady Melania Trump has marked the New Year by posting a rare, close-up selfie of herself.

The First Lady’s selfie had a glittery 2019 social media filter emblazoned across it.

Melania was dressed in a long-sleeved sparkly v-neck black dress and her son Barron was spotted wearing a black tuxedo during the event.

While Melania posted just her selfie, several party guests, including the United Nations Ambassador of The Commonwealth of Dominica, Paolo Zampolli, his wife, model Amanda Ungaro, and conservative activist Charlie Kirk, posted their own pics with the first lady at the Florida bash, per Fox News.

Charlie Kirk also snagged a selfie with the First Lady. 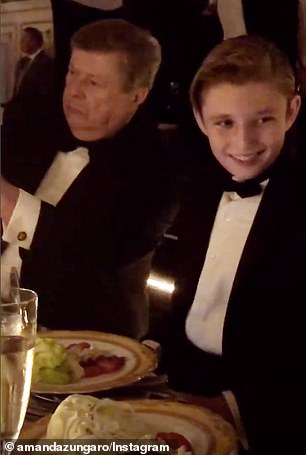