President Donald Trump blasted Democrats on Twitter Saturday for “spending money” on “fake ads” that claim the Commander in Chief called the Coronavirus a “hoax”.

In February, the president held a campaign rally in South Carolina and made comments during a speech in which he accused Democrats of “politicizing” the coronavirus outbreak.

On March 2, 2020, Snopes fact-checked the “hoax” claim. Here are President Trump’s exact words on the topic at the South Carolina rally:

One of my people came up to me and said, ‘Mr. President, they tried to beat you on Russia, Russia, Russia. That didn’t work out too well. They couldn’t do it. They tried the impeachment hoax. That was on a perfect conversation.

They tried anything, they tried it over and over, they’ve been doing it since you got in. It’s all turning, they lost, it’s all turning. Think of it. Think of it. And this is their new hoax. But you know, we did something that’s been pretty amazing. We’re 15 people [cases of coronavirus infection] in this massive country. And because of the fact that we went early, we went early, we could have had a lot more than that,” the president said. Continued Below

“The Do Nothing Democrats are spending much of their money on Fake Ads. I never said that the CoronaVirus is a ‘Hoax’, I said that the Democrats, and the way they lied about it, are a Hoax,” the president tweeted on Saturday.

“Also, it did start with ‘one person from China’, and then grew, & will be a ‘Miracle’ end!” President Trump added.

As reported by FactCheck: The Democratic super PAC Priorities USA Action has been running an ad falsely suggesting President Donald Trump called the coronavirus outbreak a “hoax.” Video Below

As reported by FactCheck:

But on the screen, “The coronavirus, this is their new hoax” appears as a single sentence. Trump did use the word “hoax” but his full comments, and subsequent explanation, make clear he was talking about Democratic attacks on his administration’s handling of the outbreak, not the virus itself, as per FactCheck.

On April 13, the Trump campaign sued WJFW-NBC of Rhinelander, Wisconsin, for defamation for running the ad, which has been running in some version in swing states almost continually since March 24, according to Advertising Analytics, at a cost so far of about $2.5 million.

A 15-second version of the ad also appears online as part of a digital ad campaign.

Various news media outlets and personalities also reported that the president called the coronavirus a hoax. As an example, Politico had run a story in February headlined “Trump rallies his base to treat coronavirus as a ‘hoax.’” Politico has not updated their article, despite being checked by independent fact-checkers. 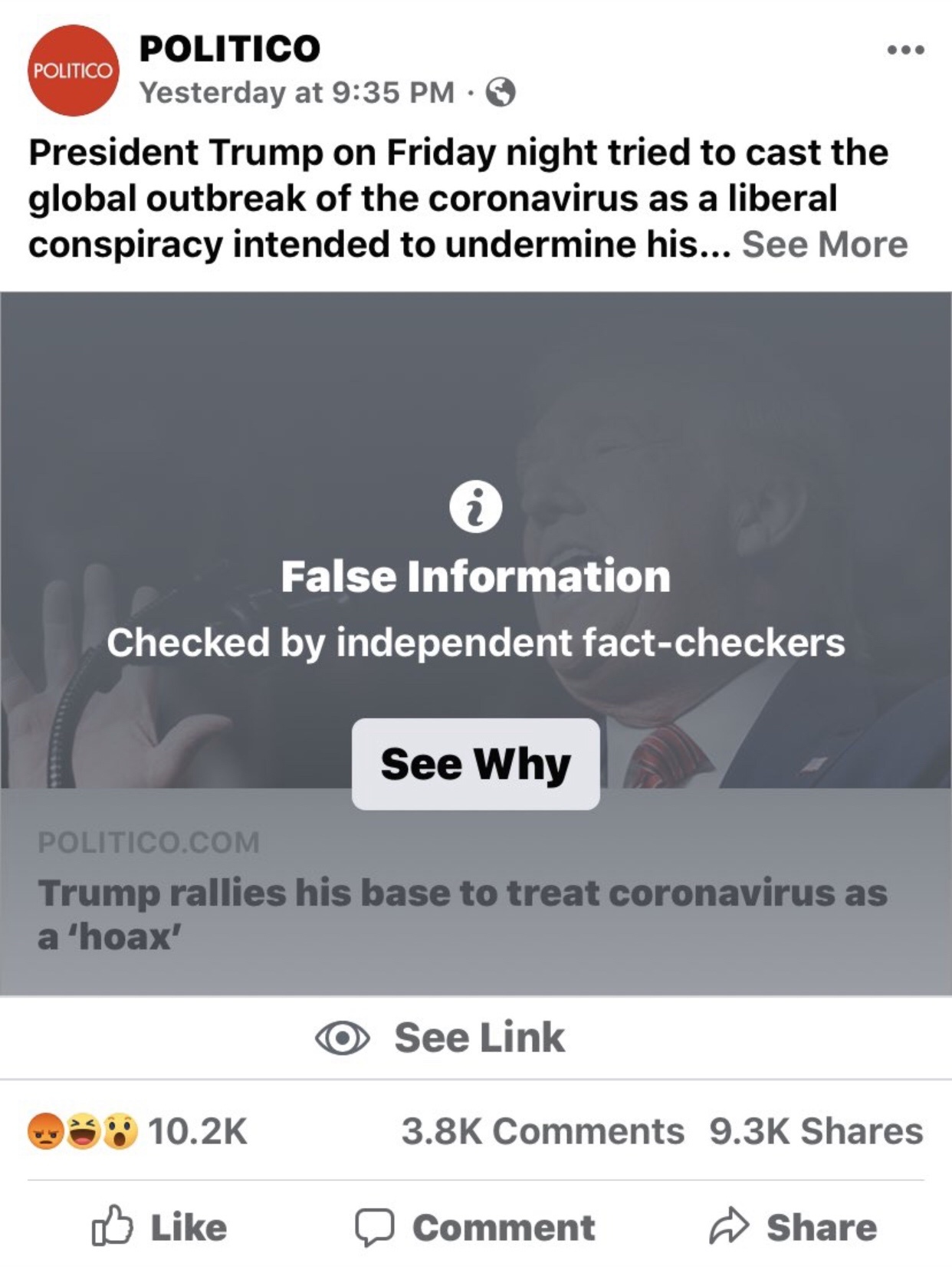 Pelosi and Schumer again on Thursday and Friday pushed the same claims on MSNBC:

Nancy Pelosi says she had an "epiphany" on Easter to push the debunked "hoax" narrativehttps://t.co/dILqVAjDmC pic.twitter.com/5gN7RSp9X6